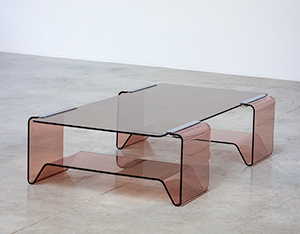 Coffee table designed by Michel Dumas for Roche Bobois, circa 1970. Featuring a bronze lucite base and smoked glass tabletop. Low table with pure futuristic and minimalist lines. The table creates a beautiful refraction due to the bronze perspex and glass that is enhanced by reflection. 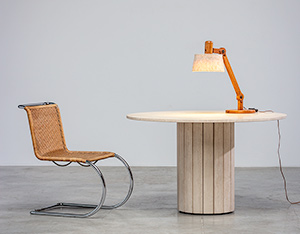 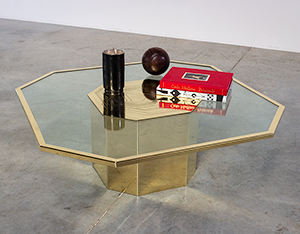 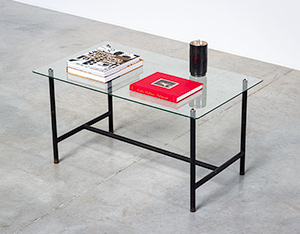 Modernist coffee table designed by Pierre Guariche for Disderot. Circa 1950, France. Black tubular steel frame with floating glass table top. All original and new glass table top in perfect mint condition. The coffee table are typical for the aesthetics and philosophy of Guariche. He was an architect first and foremost and focussed mainly on shape and form. One of his other ideals was his commitment to create simplistic, affordable and thus industrial furniture. This coffee table is an excellent example of his playful and effective by means of simple design interventions. 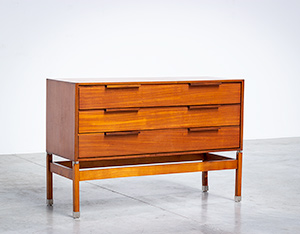 This chest is based on a solid construction made of teak wood, featuring straight lines and right-angled shapes. Designed by Pieter De Bruyne for AL Meubel, Belgium 1959. Functionality comes into play through the availability of great amount of storage space created by three extended drawers. De Bruyne placed the cabinet on a well-proportioned base with metal connections that lifts up the piece in an architectural manner and shows wonderful lines and constructive highlights. 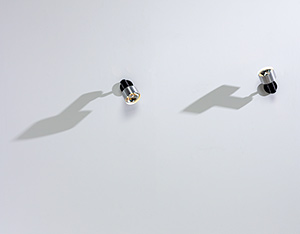 Pair of black cylinder spot lights or sconces, circa 1970. Black metal tube and brushed aluminum shade with mirrored reflection. Spots mounted on a chrome stem that can be adjusted in any position. Could be used as reading light or to highlight some objects. 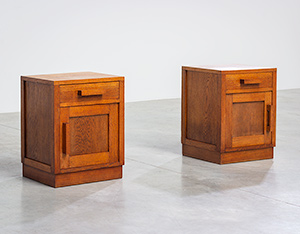 Pair of modernist night stands. Circa 1920. Elegant bedside tables is designed in a strong geometric Art Deco style. Solid oak structure with an beautiful patina. The side tables features one drawer and door. The inside has been finished with marble. An elegant and versatile pieces that is both functional and aesthetic.

Cocktail table designed by Maison Mercier Frères. Circa 1970 France. Brass luxurious rectangular shaped table with a dark brown glass table top with brass frame. The coffee table features a clean and geometric design. The similar table has been seen at the "Provincial building of Nanterre, France circa 1970s". 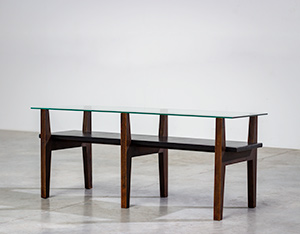 This elegant Belgian coffee table is designed in a strong constructivist 50s style. The wooden walnut legs create a design with clear modern features. Two level coffee table with rectangular black vinyl shelve and glass top. An elegant and versatile piece that is both functional and aesthetic. 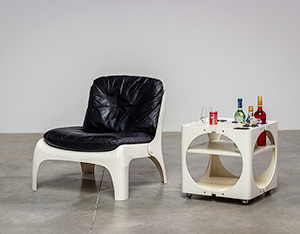 Wim Wilson desk from the collection-K for Castelijn 1960 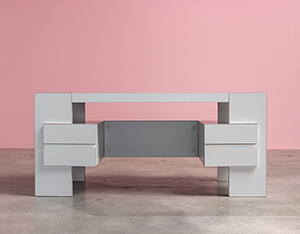 This desk has been designed by the Dutch designer Wim Wilson for Castelijn, 1966. This furniture piece is of the collection-K. The writing table is constructed out of white formica and wood and has four drawers. Wim Wilson clearly created a postmodern design that breathes the characteristics of dutch design of that period. This desk features clean modern lines.

Set of three dining chairs by Rudi Verelst for Novalux 1960 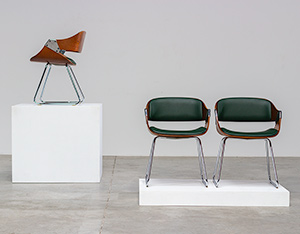 Set of three dining chairs designed by the Belgian designer Rudi Verelst. Circa 1960. The chairs are made of solid walnut plywood in an elegant shape, which provides them with a very clean line. Upholstered in new green leather. Mounted on chrome folded legs, the chairs have a slight floating appearance. 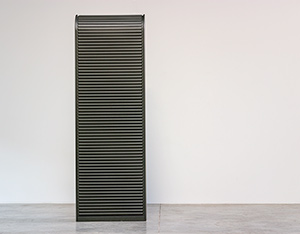 Roller shutter (storage cabinet) designed by Aldo van den Nieuwelaar for Pastoe, 1978. The A'dammer storage cabinet is a typical example of minimalist geometrical design. Dutch design classic. Olive green lacquered wood with a functional ribbed roller door that slides up the unit. Five modular shelves inside. Aldo van den Nieuwelaar (1944 - 2010) was a Dutch designer and architect. He studied at the Academy of Visual Arts in Breda and founded his own studio in 1969. In 1980, Van den Nieuwelaar was awarded with the American Society of Interior Designers (ASID Award). In 1986, he received the Kho Liang Ie Prize. His designs have been exhibited at the Stedelijk Museum in Amsterdam, Museum Boijmans Van Beuningen in Rotterdam, the Van Abbemuseum in Eindhoven and the Museum of Modern Art in New York. 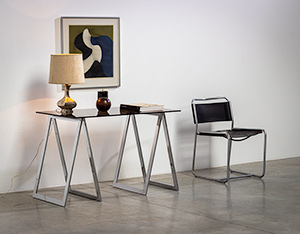 Modernist desk or console, designed by Emile Souply. Circa 1965, Belgium. Chrome plated metal trestles with smoked glass top. Émile Souply (1933 - 2013) was a silversmith by training, and his interests in the field of the visual arts were diverse. Above all, he valued artworks as objects for reflection. Throughout his career, Émile Souply’s output moved between silversmithing, designer furniture, jewelry, sculpture, architecture and teaching.

Egon Eiermann desk for Herman Miller made for the Bundestag 1970 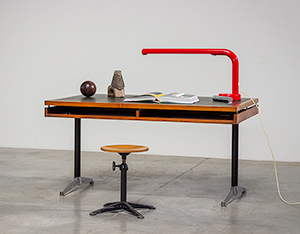 Desk designed by Egon Eiermann for Herman Miller. Circa 1970. Two level desk. Table top in walnut veneered with green vinyl. Black coated centre column with chromed aluminum feet. The desk has been made in small series for the Bundestag or the German federal parliament. 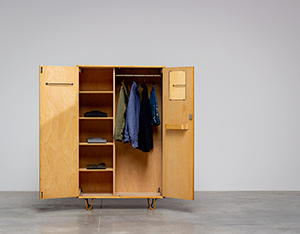